Yahoshua and the
​feast of Cukkot

Yahoshua, And The Feast Of Cukkot
By NeorahYah Germaine Yisra'el

​The Spring Feast Days and the Fall Feast Days represent two periods in history where Yahoshua interacts with mankind.  The spring feasts testify of Yahoshua's First Coming; he came to us, he atoned for us, he is risen for us.  The Fall feasts are important because they prophesy of a sequence of End-Time events, highlighted by his Second Coming.  To understand the sequence we should have an understanding of Yahuah's  Calendar, learn to correctly count the days,

The moment of Mashiach's return cannot be ascertained, however Yahuah's Calendar allows us to unravel the mystery of the timing of the events.  We can know what age we are in, by recognizing the signs we are given.  Remember the parable of the fig tree.  Yahoshua gave us a clear hint:
'Now learn a parable of the fig tree; When his branch is yet tender, and puts forth leaves, you know that
summer is nigh:so likewise you, when you shall see all these things, know that it is near,
even at the doors.'  ~Matthew 24:32~

The prophetic importance of the feast days, and how they indicate the presence of Yahoshua can sometimes be overlooked.  Throughout scripture Yahuah desires that His feasts become the focal point in our lives; and He has stressed that desire from Noah down through the ages; and quite possibly, even before Noah.  It is documented in Jubilees 2:21, that the Shabbat was kept in heaven before Adam; and that Yisra'el was Set-Apart to be the guardians of the Shabbat on earth.
​Why would it be any different with the feast days? 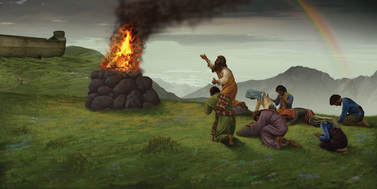 Noah was the first to sacrifice on what would later become a feast day, for man.  On the New Moon of the 3rd Month, Noah went out of the ark, built an altar, slaughtered a kid, and made atonement by its blood for the guilt of the earth.  And Yahuah made a covenant with Noah that he, nor his sons, should ever eat the blood of flesh, throughout their generations; lest Yahuah require the blood of their lives in repayment.  Noah swore a covenant, received the sign of Yahuah's Bow; and it was recorded on the heavenly tablets that man should keep the Feast of Shavu'ot every year in the 3rd Month, as a reminder; for it was kept in heaven since the creation.
~Jubilees 6:1-18~

Shavu'ot was observed until Noah died, then forgotten until Avraham, Yitschaq, and Ya'aqov, when it was observed by Yisra'el up until Mosheh's days, when it was forgotten again.  It was restored to Mosheh by Yahuah on Mount Ciynai,  in the 3rd Month. Because of the words of Noah's covenant, Yahuah made Mosheh sprinkle blood upon the people as an oath, and they all swore, 'All the words which Yahuah has said, we will do.'  They were re-introduced to Shavu'ot and the Feast of First Fruits, at Mount Ciynai in the 3rd Month also.
​
Over 400 years prior to Mosheh, in the 3rd Month, in the middle of the month(which was the 14th or 15th Day),
Avraham celebrated the Feast of Unleavened Bread, which was a Shabbat.  Yahuah gave Avraham the Torah, along with the commandment to circumcise all males born in Yisra'el on the eighth day.  ~ Jubilees 15:1-15, and Genesis 17:1~

These are just three examples of the Feast Days being observed by the patriarchs, and subsequently  shaping the actions of generations to come; actions that can elicit the blessings or the curses as described in Deuteronomy

All of the Mo'edim of Yahuah tell the story of Yahoshua, HaMashiach; whether it be to bear witness to the completion of his First Coming, or to point the way to his Second Coming.  Each reflect his relationship with mankind, and his role as a pathway leading back to our Father Yahuah.

The Pesach
At his First-Coming, Yahoshua was our unblemished lamb, who willingly allowed his blood to be shed so that we might have access to everlasting life.  The life is in the blood.
'Greater love hath no man than this, that a man lay down his life for his friends.
~John 15:13~

The Feast Of Unleavened Bread and the Wave Sheaf
Yahoshua is the 'Bread Of Life,' which  is freely given up for us.
'And he took את eth-the bread, and gave thanks, and broke it and gave unto them saying, This is my body
which is given for you: this do in remembrance of me.'

Barley sheaves were 'waved' before Yahuah as part of the First Fruit of the spring grain harvest, The Five Offerings.
The barley had to be of the finest quality, as all First-Fruit offerings were expected to be; none of the grain of the field , whether bread, or old (parched) grain, or new (green) ears, could be eaten until the day it was presented to the High Priest, who then waved it before Yahuah. ~Leviticus 23:9-11~
When Yahoshua met Miryam outside his sepulcher, she turned to him and said: 'Rabbi.'  However, he stopped her:

Two things need to be noted here:
When Yahoshua, son of Nun, led the people across the Yarden into the promised land of Kena'an, they came up into a land filled with ripened grain;
most likely sowed by the citizens of Yeriycho.  No matter how hungry  the Yisraelites may've been, the grain would not have been eaten until inspected by the priests, bound into sheaves, brought into the Tabernacle of the Assembly, and waved before Yahuah.

Yahoshua, HaMashiach is our High Priest, who sits on the right hand of the Father; interceding on our
behalf.  He met Miryam, as the First Fruit of those who will be resurrected at his Second Coming.  As such,
his caution to Miryam is understandable.  Yahoshua is the Wave Sheaf Offering that was to be presented to
Yahuah, before those who will be resurrected in the End-Time.

The Feast of Shavu'ot
Occurs at the Second Wheat Harvest, in the summer time, when another First- Fruit offering of wheat was presented before Yahuah.
​ See Shavu'ot, The Feast Of Weeks
​Shavu'ot celebrates Yahuah giving Mosheh the sapphire stones of the Torah, after 40 days on Mount Ciynai.
~Jubilees 1:1~
Shavu'ot  is also the day Yahoshua's Talmidiym received the Ruach HaQodesh, as he promised.
​~Acts 2:1-18~ 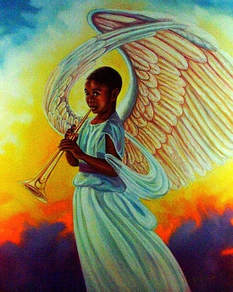 Yom Teruah: The Day Of the Awakening Blast.

It is an End-Time event that will herald the Second Coming of Yahoshua, HaMashiach.
All who have died with the testimony of Yahoshua, will awaken from their slumber at the last teruah of the shofar.
~1 Corinthians 15:51~
It does not equate to Rosh Hashanah, as it is not 'the first month of the year to you,' as decreed in ~Exodus 12:2~

Upon his return Yahoshua will execute judgement on the nations.
Yom Kippuriym:  The Day Of Atonement

On this day, Yahoshua will redeem, cleanse, and atone for those whom the Father has given him, since before the foundation of the world. ~John 18:9 and 17:12~
The Feast of Cukkot

Sukkot occurs in the 7th Month, on the 15th Day of the Monthly Count, by Yahuah's Calendar.  It is a joyous festival that continues for 8 Days; in which we are required to live in sukkahs, to remind us that Yahuah made us to live in sukkahs  when He brought us out of Egypt.

It should also be joyous to know that Yahoshua, HaMashiach will place his Tabernacle/Sukkah on earth, to dwell with us on the 1st Day of the Weekly Count of the Feast of Cukkot.    His 1000 year Millennial reign begins on the 1st Day of Cukkot.  The feast physically lasts for 7 days, and ends with a Shabbat; for a total of 8 Days.  Therefore, Yahoshua's spiritual kingdom will begin 7000 years from Adam commencing on a Shabbat on the 7th 'Day', which is the number of completion.
Six 'Days' for mankind to labor, work, and gather in their spiritual harvests.  A day for each day of the Feast Of Cukkot, until the 7th Day, when he will establish his kingdom on earth among us.  At the end of the 7th 'Day,' follows the Last Great Day.

Let us consider the Eighth Day of the feast.  Referred to in scripture, the Eighth Day is the Last Great Day, where Time no longer exists.  There will be a renewed heaven, a renewed earth, and a renewed Yerushalayim.  There is no longer a need for the sun or the moon to give light, or mark the passage of time, for the glory of Yahuah lightens, and Yahoshua is the light.  The Eighth Day is the Everlasting Kingdom, a Shabbat, in which shall be everlasting shalom and rest.
It represents Restoration and Renewal, and Revelation 21:1-27 and 22:1-7 prophesies of it. It is the 'Day' or Millennium when Yahuah establishes His Sukkah/Tabernacle among men. For understanding on this, see: The Eighth Day.

Before that Last Great Day Yahoshua and his Millennial Kingdom fulfills the Feast Of Cukkot.
He is The Lamb who is worthy to open the Book and judge righteously.  ~Revelation 5:1-14~
He is the Bread Of Life, come down from heaven bringing everlasting life with him. ~Revelation 6:32-33~
He is the Will Of Yahuah, speaking and doing as his Father has taught him.  ~Revelation 8:28
He is the Good Shepherd, whose sheep hear his voice and none other.  ~John 10:2-5 and 11~
He is the Living Water, to whom anyone can approach and drink.  ~Revelation 21:6~
He s the Light Of The World, who shines light in the darkness.  ~John 8:12, and Revelation 21:23~

The definition of the word sukkah is:  to cover; to offer protection, and shelter.  The Hebrew letter 'Qoph' (ק),
literally means 'backside of Yahuah', or 'he will cover us with his hand,' as in Exodus 33:21-22:

'Behold, there is a place by me, and you shall stand upon a rock: And it shall come to pass, while my
glory passes by, that I will put you in a cleft of the rock, and I will cover you with my hand while I pass by.'

The Feast of Cukkot is the embodiment of Yahuah, meaning, His Sukkah is with us; while Yahoshua personifies Yahuah through the Feast of Cukkot; he is literally
'Yahuah with us'.
Yahuah sent His Yachiyd (His Beloved), to Tabernacle among us, to bring us redemption and salvation.  He will do so again, at the Second Coming; bringing with Him, righteousness and peace.

That is the message of the Feast Of Cukkot.

May Yahuah Abide With You!
​~NeorahYah Germaine Yisra'el~