The earth is an enclosed system 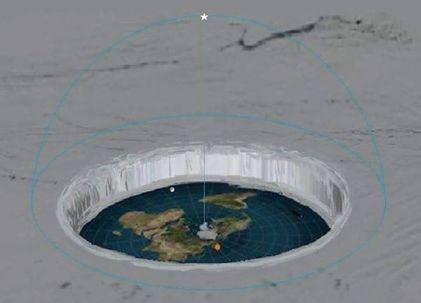 The Earth is an enclosed biological, geological, and astronomical system. It is not so much 'Flat,' as it is a plane; a circle, or disk; since it clearly has height, width, and depth; the extent of which only Yahuah knows. From His POV, when He looks down, He sees the earth as a circle, as described in Isaiah 40:22.


The earth rests on foundations which form corners, or pillars. The dry land is enclosed round about by waters; and the waters are compassed by an ice wall which serves as a border. The entire system is protected by a firmament, or vault from the waters above. The Sun, Moon, Stars, Clouds, and all that we can observe were placed WITHIN this system for
our enjoyment, health, and prosperity. Yahuah's mercy endures forever.

Genesis 1:16 says that the Moon was created with its own light.  Therefore, it does not receive its light via reflection from the sun. That is a lie.

For example:
The Sun stood still OVER Gibon, and the Moon stood still IN the Valley of Ayalon. The Sun RETURNED 10 degrees BACKWARDS in answer to the prayer of HizqiYah.

​Another example:
All the fountains of the great deep were BROKEN UP; and the windows of heaven/firmament BENEATH the waters, were OPENED. The waters increased, and All that were UNDER the whole heaven/firmament were COVERED. And all that had the Breath of Life in the dry land, died.
This scenario could ONLY have happened in an environment, similar to a terrarium,  such as the one in the picture below.

Whether U like it or not; believe it or not; can wrap your head around it, or not; it is, what it scripturally is.  All who speak against what the scriptures testify, speak against Yahuah.  That is the simple truth of it.

The earth did not stop. The Sun and Moon stopped over the earth.
The earth did not tilt on its axis 10 degrees backwards. The Sun returned 10 degrees backwards in its course OVER the earth.
Similarly, it is not likely that water 'rose-up,' covered all of the highest mountains, and extinguished all air breathing life, while on a globe spinning at 1000mph/24 hour rotation... however, it can do that on an earth set UPON firm foundations, so that it DOES NOT MOVE; and is enclosed above with a vaulted heaven/firmament that has windows beneath the WATERS ABOVE.
It is no different than pouring water into a closed terrarium.

The scriptural evidence is clear.   These are  not my words, but the words of Yahuah; including also the words of Yahoshua, son of Nun, and Isaiah, Job, Dawid, Samuel, Daniel, Matthew, John, Habakkuk, and Shalomah.

All of the above men were either prophets, and/or men anointed by Yahuah. Not to mention, there is Yahuah Himself, telling us what He has done.

After sound research and reasoning, we have come to understand that 'Jesus' is not the true name of Yahoshua, HaMashiach.
Yet somehow, we are unable to utilize the same rational thought processes to come to the conclusion that Copernicus, a free-mason, may have had sinister motives.
We are unable to see that both Copernicus and NASA, are  two sides of the same coin belonging to HaShatan; and that we have been indoctrinated with this 'science' since first grade.

Instead we shake the head, and wag the finger at those who see the truth, and believe that ALL of the Word of Yahuah is True; including verses concerning a flat, and immobile Earth. That is a very dangerous thing to do; and in this regard, your salvation is at stake.

When you scorn and mock the 'flat-earthers,' it is really Yahuah you are holding in contempt.
You are ridiculing what He created, and how he created it.
You choose to believe a lie, instead of the scriptural truth of your Creator.
You are essentially calling Yahuah a liar in regards to His creation.  Personally, I would not want that recorded in my
heavenly book of deeds.

The following is an excerpt from a letter written by Galileo to his friend and colleague, Francesco Rinuccini, in the year 1641.  The letter was written 3 years before his death, and it should be noted that for most of his life Galileo was a supporter of Copernicus' Heliocentric position, that the Sun was the center of the universe, and that the Earth revolved around it:

The quote is from a letter written by Galileo to Francesco Rinuccini, 29 March 1641.  It is from a reliable source; i.e., Stillman Drake, Galileo At Work: His Scientific Biography, (Chicago, London, The University of Chicago Press, 1978),
p. 417. Here it is:
“The falsity of the Copernican system should not in any way be called into question, above all, not by Catholics,
since we have the unshakeable authority of the Sacred Scripture, interpreted by the most erudite theologians,
whose consensus gives us certainty regarding the stability of the Earth, situated in the center, and the
motion of the sun around the Earth. The conjectures employed by Copernicus and his followers in maintaining
the contrary thesis are all sufficiently rebutted by that most solid argument deriving from the omnipotence
of God. He is able to bring about in different ways, indeed, in an infinite number of ways, things that, according                              to our opinion and observation, appear to happen in one particular way. We should not seek to shorten the
hand of God and boldly insist on something beyond the limits of our competence ....”

It should be noted that when he originally sided with Copernicus, Galileo was contrary to the Roman Catholic Church, society, and the common belief at the time.  His recantation was the result of a 'conversion' back to the doctrine of the church, just before his death a few years later.

The belief that the Earth was a flat, stationary plane, and that the Luminaries existed within a firmament, and revolved over the Earth, was a common belief dating from ancient cultures, down through the Middle Ages, and Early Renaissance periods.  It was Copernicus, who hated that people blindly followed Ptolemy's geocentrism, who upset the apple cart by proposing instead, that the earth revolved around the sun.  His theory has been shoved down the throats of school children ever since.

Yahuah is not pleased with the corruption of His Word.
His Word clearly states the truth. You either accept it, or you don't.

Below are Scriptural Witnesses Concerning The Nature Of The Earth, The Luminaries, and The Firmament:

'...In the mouth of TWO or THREE witnesses shall every word be established.'
~2Corinth 13:1~

For truth, there will be many who will not 'test the spirit,' nor bother to read the above scriptures.  They will flat out reject what the bible says about the world Yahuah created.  There are still others who will snicker, and ridicule the moment they hear the word 'flat;' as if we are proposing that the world is as thin and flat as CD discs.  Do not even go there.
Yahuah is not mocked!
ALL of the above scriptures ( and I'm sure there are even more), address the qualities of spatial relationships and dimensions, i.e., Height, Width, Depth, and Breadth.  In truth, there is nothing 'flat' about the world Yahuah has created for us; Mount Everest, and the Marianas Trench both testify of that.  However, the scriptures do not bare witness of a globe, sphere, or ball earth either.
​That would be Copernicus,  the Roman Catholic Church, and modern science, e.g., NASA ; which btw, in Hebrew means: 'to Deceive',  Strong's (H5377, H5378).