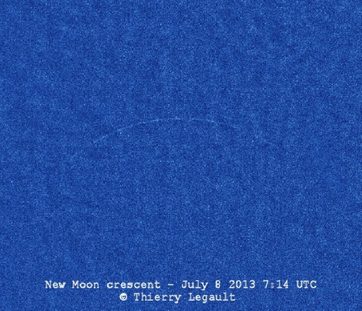 The dark moon always rises in the eastern sky, near or at sunrise. It follows the Sun across the sky DURING THE DAY; only becoming 'visible' 1 or 2 days later, in the western sky just after the Sun sets.
Then, if you're really, really, sharp-eyed, or have a decent telescope, you can see the first hint of a crescent, just before IT SETS ALSO, right behind the sun.
​
This is the 'sign' the Jews strain to observe, so they can then declare that a 'new' moon, or new month has occurred. They look for that first flash of light above the horizon just as the sun sets in the western sky. The blue picture on the left is what they claim is the beacon for Yahuah's Shabbats, New Moons, and Appointed Times.
​I don't know about you, but I can barely see it. 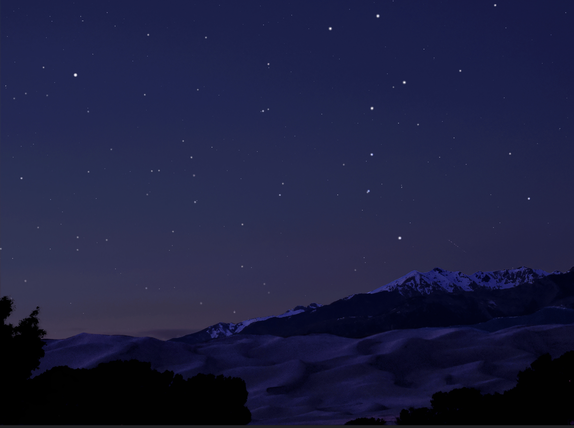 *There is zero Scriptural evidence for the 'sighting' of the Dark Moon to determine the Appointed Times of Yahuah. It is 100% based on teachings within the Talmud.
*It is pagan, following in the Greek tradition of recognizing the new month as beginning when they also 'sighted' the crescent and celebrated the 'sickle of the moon' with offerings and meals. *It is steeped in Babylonian ritual. They thought of the dark moon as the goddess Isis, and viewed her as wearing horns, which to them, resembled the points of the crescent moon.
Why can't the dark moon be seen?
It can't be seen because its lunar course takes it across the sky during the day, ALONG WITH the Sun which is the Greater of the two lights. It 'sets' in the evenings shortly after the Sun sets.  This is why Yahuah provided a Pillar Of Fire to light the way as Yisra'el left Egypt. He brought them out of Egypt on a dark, moonless night. The 14th/15th of the Month of Abib was a Dark Moon; which had already  set around the time of the Pesach and the Exodus, or shortly thereafter.

The picture on the right is an example of the night sky over a sandy desert, on a 'moonless,' or Dark Moon night.
​You can see that the terrain is shrouded in darkness, with minimal light illuminating from above.
On the night of the Pesach, and for a few nights following, this is how dark it was for the Yisraelites.  This is why Yahuah provided light via a Pillar Of Fire.  To Light the Way.  For He is Light to those who trust in Him. 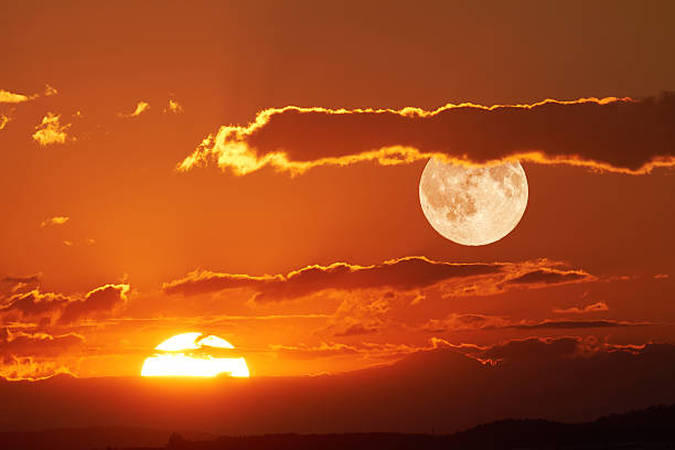 Vice versa for sunrise.  The sun will rise on the eastern horizon, while the Full Moon is setting on the western horizon.  Once again, they are in the sky together only for a few moments.

The sun is not visible in this picture because it is rising in the east, behind  the photographer; however, its light is clearly reflected on the mountains        in front of the  Full Moon setting in the west.  Both the sun and the full moon rise in the east, and set in the west; but at different times of the day.
​The Dark Moon 'shadows' the sun by rising with it, follows it throughout the day and,  sets shortly after sunset.

These last two pictures clearly illustrate that the TWO Great Lights Yahuah placed in the firmament, steadfastly adhere to the ordinances He ordained for them:
'And Yahuah made two great lights; the greater light to rule the day, and the lesser light to rule the night: He made the stars also.'  ~ Genesis1:16~
The ordinances of the dark conjunction lunar phase does not comply with the above scripture; only the Full lunar phase complies.
The Full Moon is visible all night long. The dark moon is not.  This should not detract from the beauty of the dark lunar phase.  This lunar phase was ordained by Yahuah also,
however, it does not fulfill the requirements of a beacon for the Appointed Times.  IOW's, it is not a 'Great Light' while it is in this phase.
Yahuah declared one luminary to 'Rule the Day,' the other luminary to 'Rule the Night.'
How can a dark moon fulfill that commandment if it is traversing the sky along with the Sun during the day?
How can it rule if it cannot be seen?
How can it be a beacon if it sets WITH the sun, at the very time the lesser light is supposed to be ruling the night sky?

These are the questions you must ask yourselves .
As for me, the answer is simple: it cannot.

In summary, neither the dark moon, nor the crescent moon is the 'sign' that Yah intended for us to Count The Days by.
That criteria can only be fulfilled by the true New Moon; which  is and always was, steadfast and FULL.
It is Yahuah's Sign for His Shabbats, New Moons, and Appointed Times.
It alone fulfills His commandments.

May Yahuah Bless the hearers and doers of His Word.
​~NeorahYah Germaine Yisra'el~